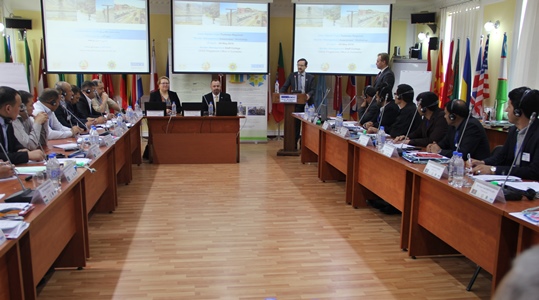 Developed in line with the OSCE Border Security and Management Concept, the two-week event promoted regional co-operation, information exchange and cross-dimensional border security dialogue in the region, including Afghanistan. Strengthening effective working relations between the border officers of these countries was among the key objectives of the event.

“In the opening remarks, delivered on behalf of Ambassador Natalya Drozd, Head of the OSCE Centre in Ashgabat, Merdan Gochkarov, National Project Officer, expressed appreciation to the governments of the participants’ countries for ensuring their participation in this important regional workshop.

Jonathan Holland, BMSC Director, noted that “this workshop has been a continuation of constructive work with our colleagues in Ashgabat”. He added that the event was a good example of co-operation between Turkmenistan, Tajikistan and Afghanistan, which will contribute to border security efforts in the region.

The regional workshop covered a wide spectrum of topics, such as the importance of cross- border co-operation to ensure border security through enhanced co-ordination and transnational organized crime. Other topics included trade facilitation, asylum seekers and refugees, risks analysis and passenger profiling and social and economic development in border territories.”

Zaza Berozashvili, international expert on the fight against transnational organized crime, who was one of the trainers, said: “Turkmenistan and Tajikistan both share borders with Afghanistan, a state that constantly faces security challenges of a national and transnational nature. While the country’s efforts to counter these threats are commendable, it is also important to acknowledge the crucial role its neighbours play in ensuring regional security.”

The event was jointly organized by the OSCE Centre in Ashgabat, the OSCE Programme Office in Dushanbe and the Border Management Northern Afghanistan (BOMNAF) project, which is funded by the EU and implemented by UNDP.