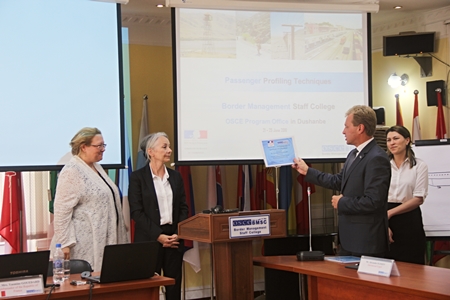 The main objective of this training event was to provide representatives of border, customs and drug control agencies with comprehensive overview of drug trafficking situation in the world as well as share good practices in countering the illegal trafficking of drugs and precursor chemicals used in France and Europe.

“As international travel and foot flow increases globally, so do the demands on border security personnel which, in reality, is not subject to reciprocal adjustments. This means that officers tasked with protecting our borders need to be much more vigilant and selective in terms of secondary inspections of passengers”- noted Jonathan Holland, Director of the BMSC. “Profiling is the tool that allows performing inspections in an educated way. We are glad to have been able to provide our facilities and support to make this event possible, and hope that co-operation with our colleagues from the Embassy of France will be as fruitful in future”- added Holland.

Organized by the French Ministry of the Interior's International Cooperation Service, based at the French Embassy in Kabul, Afghanistan the event was implemented with the support and on the premises of the OSCE Border Management Staff College.

Maftuna Ibrahimova, a participant of the training, stated that the event was conducted on a very high level, further noting that “the participants received invaluable knowledge on passenger profiling and learned how colleagues from France perform screening of people and goods at borders. This information and the fact that we were able to interact with colleagues from other agencies was very useful and hopefully will have a positive impact on the effectiveness of our future joint initiatives”.